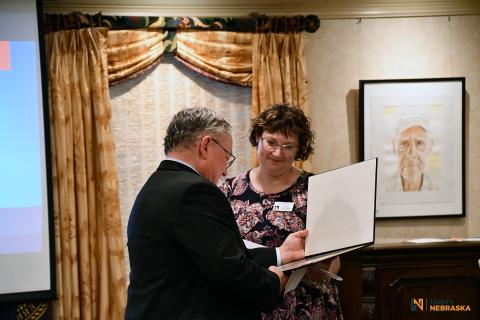 The Nebraska Board of Engineers and Architects has awarded the first ever honorary license to esteemed architect Thomas Rogers Kimball.

Kimball, who died in 1934, three years before the Board was created, never had the opportunity to become officially licensed in Nebraska.

Lenora Isom, Chair for the Board, presented Kimball’s great-great-nephew, John Kimball with the license certificate at a small reception held at the Governor’s Mansion.

The reception was held after The Nebraska Hall of Fame ceremony at the Nebraska State Capitol where the new bust of Thomas Rogers Kimball was revealed.