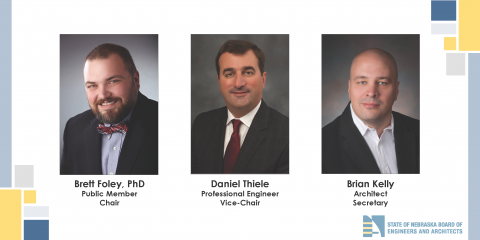 The Nebraska Board of Engineers and Architects is pleased to announce new officers for the 2021 year. At the March meeting, the Board unanimously voted Brett Foley, Daniel Thiele and Brian Kelly as the Chair, Vice-Chair and Secretary, respectively.

Foley, Ph.D., is a psychometrician from Denton, Nebraska, and has served with the Board as the Board’s public member since 2018. He is the third public member to serve on the Board since the position was created in 1998. This is Foley’s second consecutive year as an officer after serving as the vice-chair in 2020.

Thiele hails from Omaha and is a licensed Professional Civil Engineer with a focus on geotechnical and materials engineering. Thiele is licensed in 22 states and has over 30 years of engineering experience. He was the president of the Professional Engineers Coalition and the Nebraska Society of Professional Engineers’ Education Foundation. This is also Thiele’s second consecutive year as an officer after serving as the secretary in 2020.